As the majority of you know, either from constant tweets concerning heartbreak or, if you’re one of my friends, continual interrogation as to ‘how long does heartbreak take?’ and ‘will I ever have sex again?’, I have been single for the past two and a half weeks.

As a first timer for heartbreak, the feeling of hopelessness and helplessness swamps you into a Arctic Monkeys lyric fueled world. Cliche’s become a daily occurrence in the form of a ‘time is the best healer’ text message from your mum and, for now, nothing will help you but ice cream.

The following is a list of 10 weird things I have done in the past 19 days in an attempt to comfort me during this tough time. 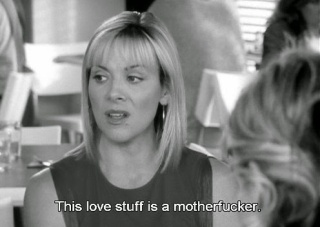 1. Planned a nipple piercing. Whether this is a hint of rebellion, a form of masochism or a need to feel sexier, I really don’t know
2. Sat on various benches situated around London reading ‘Submarine’ in hope of someone coming up to me and falling in love with me as we discuss the wonder behind Alex Turner’s soundtrack for the film adaption
3. Gotten excited at the prospect that every man I’ve seen holding a guitar case is potentially in an indie band that performs in Camden every weekend. #groupie #ionlydateboysinbands
4. Had to decline marijuana. ‘It will make you happy’ was not what I needed to hear
5. Listened to Kate Nash ‘Nicest Thing’ constantly, bearing in mind I haven’t listened to that song since my four month long relationship in year 8 ended
6. Taken selfies in my underwear with my middle finger raised in the air, purely for myself and no one else
7. Typed ‘you’re a cunt’ into the Youtube search bar in hope my ex would still be signed into my account and look at my video history
8. Googled ‘Alexa Chung and Alexa Turner’ and scrolled through hundreds of pictures attempting to fathom the split between the two most beautiful, fashionable, wonderful couple in the world
9. Had a fringe cut in for the first time in about 10 years. To look like my ex’s celebrity crush? To look unrecognizable? To feel the nostalgia of life without boys?
10. Considered revising (I haven’t)